Edit
watch 01:36
We're Getting Mutants in the MCU - The Loop
Do you like this video?
Play Sound

Leaf Ball is a contestant who was a competitor on Supernova Specialization.

Leaf Ball is a ball of leaves who likes to protect nature. She hates on anyone who's plastic, as seen by her interactions with Shopping Bag and is at times quite rude. Despite that, Leaf Ball is quite kind and uses her skills to help others as evident with her befriending Snowflake.

Leaf Ball is a ball of leaves crumpled up, with a shovel behind her as a weapon and a blue headband with orange leaves printed on it, as she calls herself a "Nature Warrior".

She won the prize in episode 2.

She has round edges with ovals sticking out of her. Her headband is a pale blue with stars and her shovel has a gray end with a blue handle.

She has sharp crumpled edges and she's more limish. Her outlines are thicker and darker. Her headband has visible ends showing and the star pattern is gone. She now gains a dark blue shading on her headband. Her shovel pattern changed with having a light-blue shine, the handle is pale blue, and the shovel holder is pink

Her outlines are thinner and lighter. This goes for her headband and shovel as well. The light-blue shine on shovel is gone

Still the same but with a different pose.

She remains the exact same, except her Shovel is slightly larger and she now has tufts of grass on her head. 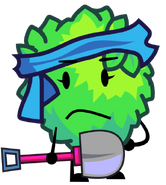 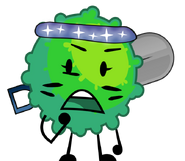 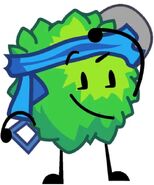 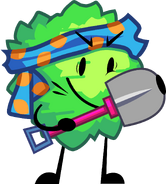 in episode 1 she is seen bulling shopping bag

in episode 4 she makes a pancake and wins!

Community content is available under CC-BY-SA unless otherwise noted.
Advertisement